We can all be proud that nearly a century ago, not only did the founders of our great club select a special piece of ground, engage a top golf course architect, and chose a unique moniker, but built a magnificent clubhouse.

The impressive Tudor structure stood for a quarter of century until it was struck by a bolt of lightning on the humid evening of July 13,1948, during an intense thunder-storm, burning the clubhouse to the ground, leaving only the brick walls and the tall brick chimneys standing (more about the catastrophic fire and aftermath in a future newsletter). 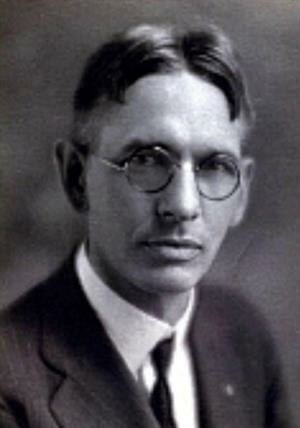 The original clubhouse, “the most ambitious country club project in the middle west” and designed to be a “showplace”, was approved by the Board of Directors on a cold Thursday night, February 24, 1922, with “ground to be broken at once.”  Construction funds were allocated at $180,000.00, with the final cost running at approximately $200,000.00, more than 3 million in today’s dollars. The Board selected the architectural firm of Vorse, Kraetsch and Kraetsch, led by Norman T. Vorse (picture on the right).

Vorse, born into privilege, studied at the world famous L’Ecole des Beaux-Arts in Paris. He later cycled through Europe with a focus on architecture and filled his sketchbooks with studies of buildings. Vorse attended George Washington University in Washington, DC, and interned with the prestigious local architectural firm of Proudfoot and Bird, before forming his own firm in 1913, later merging with the Kraetsch brothers in 1919. Vorse’s fee for designing the Wakonda clubhouse was a charter membership. He was a champion bridge player and enjoyed motoring to the Club in his Cadillac coupe for Thursday evening bridge games.

With the city growing, the firm became a “strong force,” rapidly designing many important buildings and residences for the city’s wealthy, including the Des Moines Municipal Courthouse (now the Des Moines Police headquarters), the Hoyt-Sherman Auditorium, Grace Methodist Church, St. Augustine’s Church, the Oaks/Elmwood/Birches grand avenue apartment complex, the Commodore Hotel, the 12 story Capitol theater/Paramount building, and dozens of residences, including the A.H. Blank mansion and other Tudor mansions on Waterbury Road. Vorse remarked on his birthday, 8 months after the Wakonda club-house opened, that “my principal occupation is fishing and I practice architecture as a sideline.”

The construction of the Wakonda clubhouse was awarded to Arthur H. Neumann and company. Although the Neumann Brothers Construction company history begins in 1912, later constructing many of Iowa’s most identifi-able buildings and most of the structures that shape the Des Moines skyline, the family roots in Des Moines go much deeper. Arthur’s grandfather arrived in Des Moines in 1856, one year after F.M. Hubbell, stepping down from a cov-ered wagon. The family, from Germany, reportedly introduced the first Christmas tree to the city.

Arthur H. Neumann and company had a record year in 1922. The company built not only the Wakonda clubhouse, “the best and most complete country clubhouse in the central west”, in less than 9 months, but at the same time constructed the Insurance Exchange Building and Des Moines’ “newest skyscraper”, the 18 story Equitable Life Insurance Building. This was all accomplished with no cranes to lift pieces into place, but rather derricks attached to the outside of the structures and powered by steam or horses to haul the beams and materials.

The brick clubhouse structure ran more than 300 feet from east to west. The west side contained club rooms, a lounge, and a locker room. The pro shop was housed in the lower level of the northwest corner. The east wing contained dining rooms and a ballroom. Sleeping rooms were contained in the southeast wing. The manager of the Club, the head chef, and the engineer maintained living quarters at the Club. 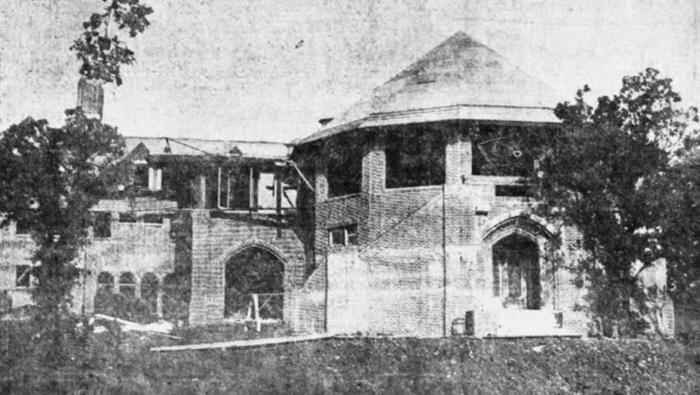 In an interesting side note, the daughter of Arthur H. Neumann, Elizabeth “Betsy”, wed George S. Peak, the grand-son of George B. Peak, former owner of the Peak farm, which became the Wakonda golf course. Many of mem-bers of the Neumann family have enjoyed Wakonda Club over the years and several descendants remain as members today.

Our current clubhouse, built on the foundation of the clubhouse destroyed by fire, was completed in the fall of 1949. It was formally opened by club president, Francis B. Dickinson, on February 5, 1950.