In two years, our iconic Wakonda Club will celebrate the 100th anniversary of its creation and founding. A remarkable milestone. Below is a short vignette recalling the opening dinner dance of our great club. More historical vignettes, tidbits, and accounts will follow in future newsletters, including the origin of “Wakonda”, the original clubhouse, remarkable club events, and stories about some of the 56 major golf champions and other notables who have played Wakonda.

The Wakonda Club was born from a desire to play golf, tennis, polo, swim, and socialize.

The inaugural dinner dance took place at Wakonda on Saturday, December 16, 1922 , 24 months following the great “Spanish Flu” pandemic and passage of prohibition. As the Des Moines Register proclaimed, “Society turns out en masse at showplace” for the “social event of the season” at the “new Wakonda Club, one of the finest in the United States and considered the most ambitious country club project in the middle west.” 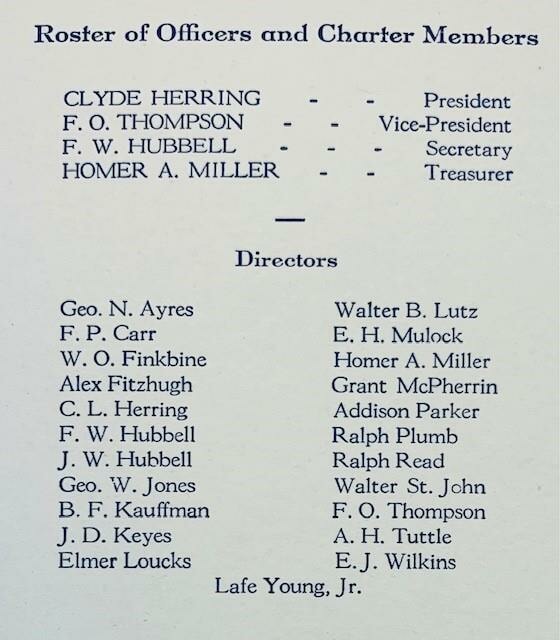 The Club, with two golf courses, stables for “fifty saddle horses”, bridal paths, polo grounds, outdoor swimming pool, and “well stocked pond and creek, will afford recreative diversion for members and families, while the clubhouse and landscaped grounds will be a showplace for Des Moines.” Described as the “equal of any country club in the country” the original investment for Wakonda was approximately $650,000.00, of which $200,000.00 was spent on the clubhouse, adjusted for inflation the investment amounts to nearly 10 million dollars today.

Members and guest were driven out to the Wakonda Club “set among the native oak forest,” with rolling hills, “far from the city smoke and grime” in “Willys-Overlands, Elgins,” and other rugged transportation, as S.W. 21st street (now Fleur Drive), was a narrow slippery road that rose from Raccoon river valley over a wooden two-trestle bridge and a railroad crossing, eventually climbing the steep hill leading to the club entrance.

500 resident members and prominent guests from across the country attended the “brilliant dinner and dance.” During the evening dinner, the clubhouse was “set upon by a squad of Indian masquerades who skipped in and performed a war dance among the tables.” A women’s chorus, dressed in indian costumes, caroled the song “Wakonda,” which member, Mrs. Rena Rodgers Hayward, composed for the occasion. An orchestra, led by Des Moines attorney Ray Harrison, played the first dance. A feature of the dancing was a waltz written by Harrison, who also sang. Many “handsome gowns” were worn, including a gown of sapphire blue by Mrs. F.W. Hubbell, a gown of silver by Mrs. Homer Miller, and a gown of pearl white by Mrs. Clyde Herring (pictured below). The ballroom was adorned with numerous “baskets of flowers suspended from the ceiling” along with an “abundance of cut flowers, palms, and ferns” decorating the clubhouse from the greenhouse of the club president.

The membership roster included some of the oldest and most prominent families of Des Moines. Clyde Herring, later to become Iowa governor and U.S. Senator, who, as a youth had a chance meeting with Henry Ford, leading him to become the Ford autombile dealer for the entire state of Iowa, was the first president of the Club. F.W. Hubbell, grandson of the founder of Equitable Life Insurance was secretary, F.O. Thompson, real estate investment broker, was Vice-President, and Homer Miller, former Iowa state bank examiner and president of Iowa National Bank, was treasurer.