Ninety-Nine (99) years ago, when our club was created, the club founders sought out a special and unique moniker for the Club - Wakonda. Many appreciate the Native American origin of the word, but few understand the meaning of Wakonda.

Wakonda is the “great Creator power” of the plains Indians and Sioux tribes. Wakonda is the “omnipresent” creative force, never personified in Sioux legend, and without a gender until introduction to English with gender specific pronouns. The plains Indians believed in the supernatural origin, a kind of holiness or wonderfulness, belonging to all-natural objects. Wakonda is just that, the mysterious and invisible divinity power.

The club founders further described Wakonda to the members at the inaugural 1922 dinner as follows:

“Wakonda. This aboriginal word was found and mapped as the name of a stream which flows southeastern Iowa through northeastern Missouri into the Mississippi, and it came from the Indian apprehension of omnipotence. Manito was God whose power was Wakonda. The wind and hills were part of Manito but the winds were put in motion and the hills were kept in place by Wakonda. The floods and forests of Wakonda River fed the hungry and its quiet banks afforded rest. The ancient habitations and the modern homes along this Indian Jordan were part of Manito but through the power of Wakonda the wikiups have vanished and by his grace our modern homes remain.”

The original logo of the club contained a wikiup or teepee (pictured below).

Native American legend also describes Wakonda as more than a source of divine power, but a place “from which all goodness emerges and to which all aspire to journey.” How appropriate then, we call our iconic club “Wakonda”.

Interestingly, the United States Navy proposed during WWII a 310-ton vessel be built, to be named the USS Wakonda. Regrettably, the contract was later cancelled. Prior to the great Wakonda Club fire of July 1948, when the Clubhouse was struck by lightning (more about that in a future newsletter), the Club proudly displayed the brass capstan of the original battleship USS Iowa (BB-4), as a “reminder to club members of the grand old ship that won fame in the destruction of Cervera’s fleet at the battle of Santiago” during the Spanish-American war.

Before Wakonda was a premier golf course and quintessential country club, it was a 210-acre farm owned by prominent insurance man, George B. Peak (pictured below), a Kentucky native who came to Iowa in 1899, later serving as founder and president of Central Life Insurance (which merged with AmerUs Life and is now Aviva). 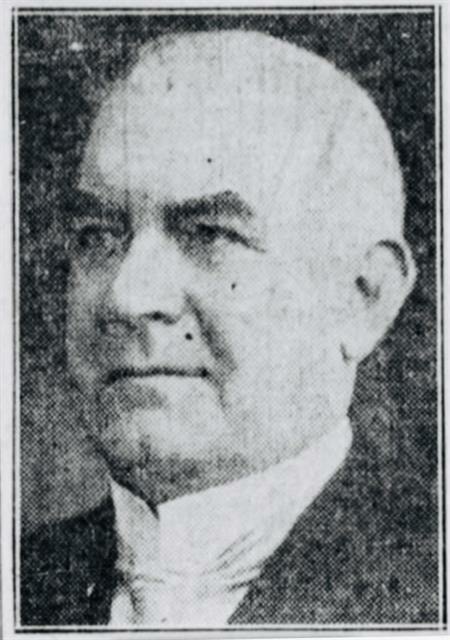 Peak was a civic leader, the builder and owner of the Insurance Exchange Building, “the largest fire-proof office building in Iowa and best equipped west of Chicago,” a promoter of Keosauqua Way as boulevard into the city’s business district, and a trustee of Drake University. His motto was “Be not satisfied with less than the best.”  During Peak’s time on the farm, he “cleared the groves and sowed his favorite bluegrass from Kentucky” on what is now Wakonda. The Peak farm was known for hosting “good old fashioned Fourth of July picnics” where more than 700 regularly attended and engaged in “foot races, high jump acts, and other amusements,” with Peak delivering “patriotic addresses.”

Noteworthy, after Peak sold the farm to Wakonda he planned to develop “high class residences, to be known as Wel-Ko-Ma Heights,on fifty-two acres fronting Wakonda Club. Unfortunately, Peak was never able to oversee the development of Wel-Ko-Ma Heights,as he was “stricken at his desk” and died of heart attack in August of 1923, two years after he sold the farm.

In a future newsletter we will dig into the original course design, the interesting background of the remarkable course designers, William Langford and Theodore Moreau, known as “The Sultans of the Steam Shovel,” and notable first rounds of golf played at Wakonda in 1922 by Scottish great, George Duncan (winner of the 1920 British Open) and Walter Hagen, who played Wakonda just three months after beating Duncan by one stroke to become the first American-born winner of the British Open in 1922 (the first of Hagen’s four Open championships).