U.S. Carries off the Cup at Wakonda

The Americas Cup was an international competition between top amateur golfers from Canada, Mexico, and the United States. Seven member squads from each country competed in the tournament. The site of the event cycled between the United States, Canada, and Mexico. The biennial tournament was a team match, held in even-numbered years, beginning in 1952, when there was no Walker Cup match, and odd-numbered years from 1961 to 1967 to avoid clashing with the Eisenhower Trophy.

Wakonda was selected as the site for the Americas Cup over a number of other clubs and hosted the event in early September 1963. The 1958 tournament was held in the United States at the Olympic Club in San Francisco, and in 1961, the competition was held the Club Campestre Monterrey in Mexico. 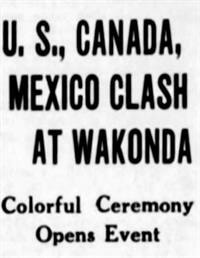 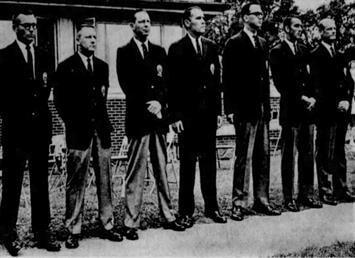 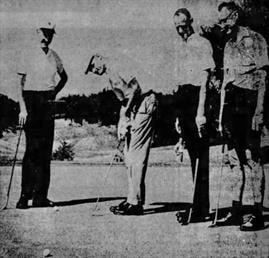 The teams of seven players and a captain were chosen by the golf associations of the competing countries; The Royal Canadian Golf Association, the Association Mexicana de Golf, and the United States Golf Association. The teams played three 18-hole three-ball “sixsome” matches in the morning, and six 18-hole three-ball matches in the afternoon over two days. In the “sixsomes” a two-man team represented each country with players hitting alternate shots.

The “national golf spotlight” was focused on Wakonda for the 7th tournament between the three countries. The top amateur golfers from the United States sought to maintain the United States grasp on the Americas Cup, a “trophy that frustrated shot makers from Canada and Mexico.” In 1952 the U.S. won by a single point and by only a point and half in 1960. The U.S. team was captained by the colorful swashbuckler, Billy Joe Patton, (best known for almost winning the 1954 Masters as an amateur and 5 time member of the Walker Cup team, including as captain in1969); playing alongside Patton were Dean Beman, (winner of the 1959 British Amateur, the 1960 U.S. Amateur, and winner again of the U.S. Amateur in 1963 at Wakonda, 2nd in the 1969 U.S. Open and later commissioner of the PGA for twenty years), Richard Davies (winner of the 1962 British Amateur), Labron Harris, Jr., (winner of the 1962 U.S. Amateur, low amateur at the 1963 Master, and later vice-president of the of the PGA), Richard “R.H.” Sikes (winner of the U.S. Amateur public links championship in 1961 & 1962, the 1962 Arizona Open as amateur, and 1963 NCAA golf championship), Charles Coe, (winner of the 1949, 1958, U.S. Amateur, the 1950 Western Amateur, the 1947, 1949, 1952 Trans-Mississippi Amateur, 6 time member of the Walker Cup team, including as captain, and player in 19 Masters, claiming low amateur honors in four consecutive decades), and Dr. Ed Updegraff, legendary amateur golfer and member of famed Updegraff golf family of Boone, brother of long time Wakonda members Dr. Bob Updegraff and nephew Gary Updegraff (winner of many tournaments, including the 1940, 1941, & 1947 Northwest Amateur, the 1952 Arizona Amateur, the 1954, 1955, 1961 Southwest Amateur, the 1957 & 1959 Western Amateur, member of 3 winning Walker Cup teams, including as captain, player in six Masters, winner of 12 Tucson city championships, and winner of the Tucson Country Club championship 27 times, later winner of the 1981 U.S. Senior Amateur, named recipient of the highest honor of the USGA, the Bobby Jones award, and inducted into the Arizona and Iowa Golf Associations Hall of Fame).

The Mexican team was captained by Juan Estrada.

The members of the golf team representing Mexico flew from Mexico City to Chicago. Since they had not traveled to the Midwest before “they wanted to make the most of their visit” and chose travel by station wagon from Chicago to Des Moines rather than by air. All but one of the players spoke fluent English. 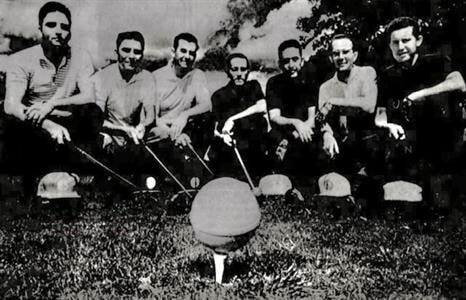 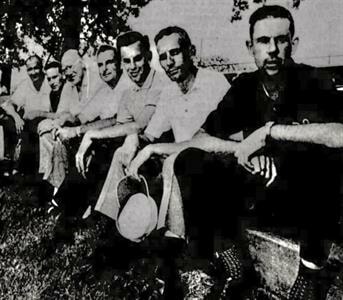 The Canadian team was captained by Duncan Millican.

The Americas Cup started with “pageantry and ceremony as colorful as any that could be recalled”, declared Bert McGrane of the Des Moines Register.

In the late afternoon of Wednesday, September 4, 1963, the flags of Canada, Mexico, and the U.S. were raised by the team captains, each on their own 30-foot flagpole, in an area behind the 18th green. The flags went up as a 50-piece band from the U.S. Strategic Air Command Base in Omaha played the national anthems of each country. The teams of each nation stood behind their flags, as a “drill team of 25, with fixed bayonets, stood at attention.”

Julio Orvananos, President of the Association of Mexicana de Golf expressed thanks to the Wakonda Club and the U.S. “for receiving us with open arms.” Albert Rolland of the Royal Canadian Golf Association recognized the “lasting friendship between the competing nations.” And the vice president of the USGA, C.W. Benedict, keynoted the occasion, saying, “In these days of cold wars and mixed tensions, we need no passports between our nations.” Following the flag raising ceremony and official remarks, the Strategic Air Command Band played a twenty-five-minute concert and the “stage was set for the America’s Cup.” 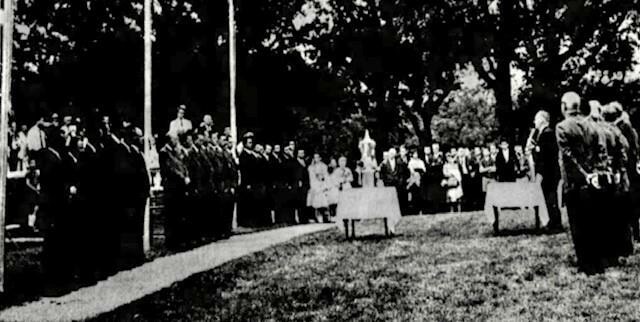 Because the driving range was less than 250 yards in length, the existing “six-foot fence along Fleur and Watrous was raised to eighteen feet.” Caddies wore fresh “white shirts with red lettering and plain white hats.”

Bill Rose, club pro said he had not seen “Wakonda play as tough as it does right now.” Whereupon a member of the team from Mexico said, “oh it’s not so hard, two of our players had 71’s — for 12 holes.”

The Wakonda oak trees were eyed by some with caution. The 1962 British Amateur champion said, “it will sound like xylophone when the guys start hitting those trees.” 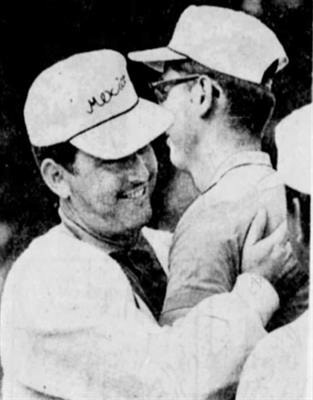 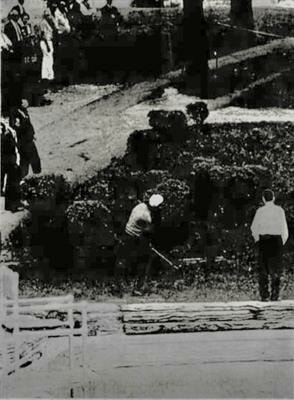 The putting surfaces were also the “despair of many players.” One quipped, these greens “are plain murder,” and, “you better hit the ball with your shadow instead of a club if you don’t want it to roll clear off a couple of the greens.” The greens on holes 11 and 14 were “particularly challenging.”

Joe Wolfe of Chicago and maker of custom clubs at the time for Arnold Palmer “took his first at look at Wakonda” and expressed a reaction: “Whew, this is a golf course!”

The tournament was “a tight battle through the first nine holes” and very competitive the first day, as “Wakonda’s exhausting and exacting slopes brought many to their knees.” The favored U.S. team fought off a fierce challenge from Canada to take the lead 12 1/2 to 11.

Although the first three sessions “were less than an assurance for the Yanks” the U.S. team, heavily favored to win, wrapped up the Americas Cup with a closing surge by Dr. Ed Updegraff, Billy Joe Patton, and R.H. Sikes, to capture the seventh the straight title for the U.S. The host team accumulated 26 1/2 points in the final competition, with 19 1/2 for Canada and 8 for Mexico. 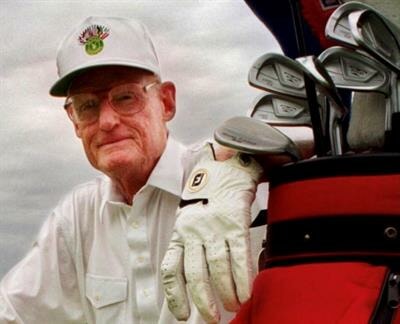 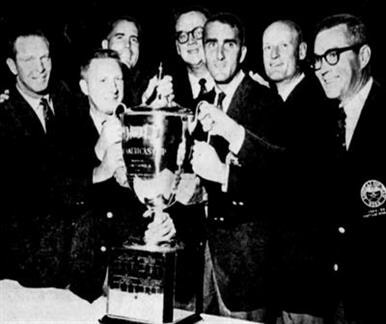 The Jerome P. Bowes Americas Cup trophy had been on display in the lobby of the Hotel Savery, along with flags of the competing nations.

The U.S. team’s successful defense of the title allowed them to “carry off” the huge 34-inch-tall sterling silver Americas Cup trophy, containing the inscription: “The Americas Cup - towards greater international understanding through sportsmanship and goodwill of friendly competition among amateur golfers in the Americas.”