The Early Days of Wakonda

What a momentous milestone, the 100th anniversary of our Club. Members can be rightfully proud. Wakonda was established in 1922, but the idea for Wakonda came about several years earlier.

In 1919, just a year after the “Great Flu” pandemic had passed, and a year before prohibition would become law, the members of the Des Moines Golf and Country Club, then referred to as “The Country Club,” learned that a 20-year lease, secured in 1903 on their golf course land (southwest of the present day Waveland golf course and near Polk Boulevard), would not be renewed. Considerable discussion and debate took place among the members on where the Club should relocate and build a new course. A number of sites were explored. The Club eventually chose to build on a site west of the city limits, the 147-acre Ashworth Estates.

A large group of members, however, led by the Hubbell and Denman families, and others, decided to split off and form a new club, to be located within the city limits, and be called Wakonda. 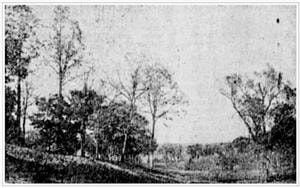 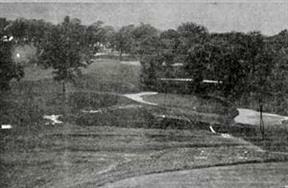 The site eventually secured was the George B. Peak farm (more about prominent businessman George B. Peak in the February 2021 newsletter), “A most picturesque, old estate,” and referred to as the old Hobbs homestead. Dr. Alvin I. Hobbs, a pastor and Dean at Drake University, had purchased the land in 1869; it was one of the outlying farms around Des Moines. Dr. Hobbs left the estate to his daughter, Mrs. George B. Peak. The west side of the property was 21st street (now Fleur Drive). It was, “Part of the Wilson highway, a direct motor route from El Paso TX, to Canada,” and on the south was the city limits, bounded by Watrous Avenue. Importantly, new brick paving ran from, “The heart of the city almost to the end of the farm.”

The farm that would become Wakonda was described as, “wooded pastureland of low rolling hills, broken by long ravines between, with as many as ‘eight springs, coming from the hillsides [which] will lend themselves to the construction of artificial lakes and water hazards.’”

Nationally known golf course architect, William B. Langford, was, “contracted for landscaping of the grounds.” Langford took up golf as part of a rehab program as youth when he suffered from polio. He developed into an excellent amateur, playing on three championship teams at Yale. He earned a master’s degree in mining engineering at Columbia University, but soon thereafter chose a different path, working as a golf course architect for the American Park Builders, and formed his own design firm in partnership with Theodore Moreau. Langford focused on course design and Moreau on construction (more about Langford in the March 2021 Wakonda Newsletter and in a future newsletter). 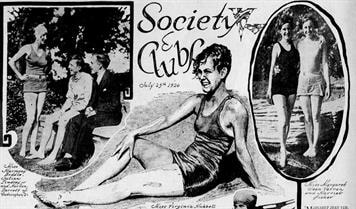 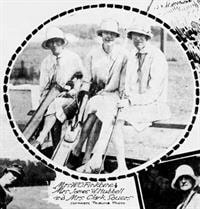 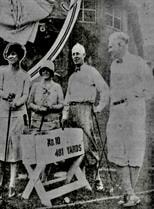 Langford had come to Des Moines during this split in membership of the Des Moines Country Club, and played golf in June of 1920 with Jimmy Hubbell, State and Trans-Mississippi champion Robert McKee, and Des Moines Golf president Francis Dickinson.

Work on the Wakonda course started in 1920 and was nearly complete in 1921. The course opened for play in the summer of 1922, after the greens had matured. The course would not become irrigated until some eight years later.

The original tees were designated areas where there was a “tee box.” In the “tee box” was wet sand that could be shaped into a “conical mound,” usually with aid of a small glass, to create a sand “tee.” 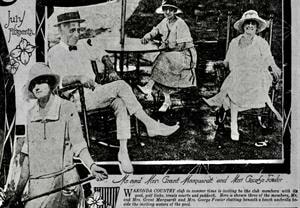 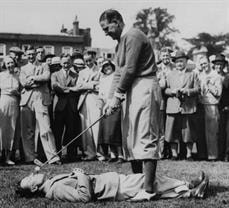 Among the prominent players of Wakonda the first summer were Scottish golfer George Duncan, winner of the 1920 Open Championship, British golfer Abe Mitchell, personal golf tutor to Samuel Ryder, the “father of professional golf” Walter Hagen, and Australian golfer and “trick shot artist” Joe Kirkwood, Sr. (more detail about these players in the May 2021 newsletter). Some of Kirkwood’s best-known tricks were hitting multiple balls in a row without looking at them and hitting balls simultaneously by holding two or three clubs at the same time.

Kirkwood would later be hired to promote the use of wooden tees over the mound of sand by dentist and golfer William Lowell, maker of the “Reddy Tee,” a wooded tee with a painted red top. The use of the red top Reddy Tee “exploded” in popularity and became the standard in golf by the late 20’s. 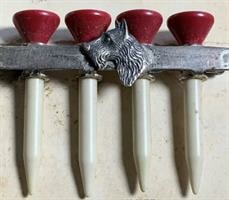